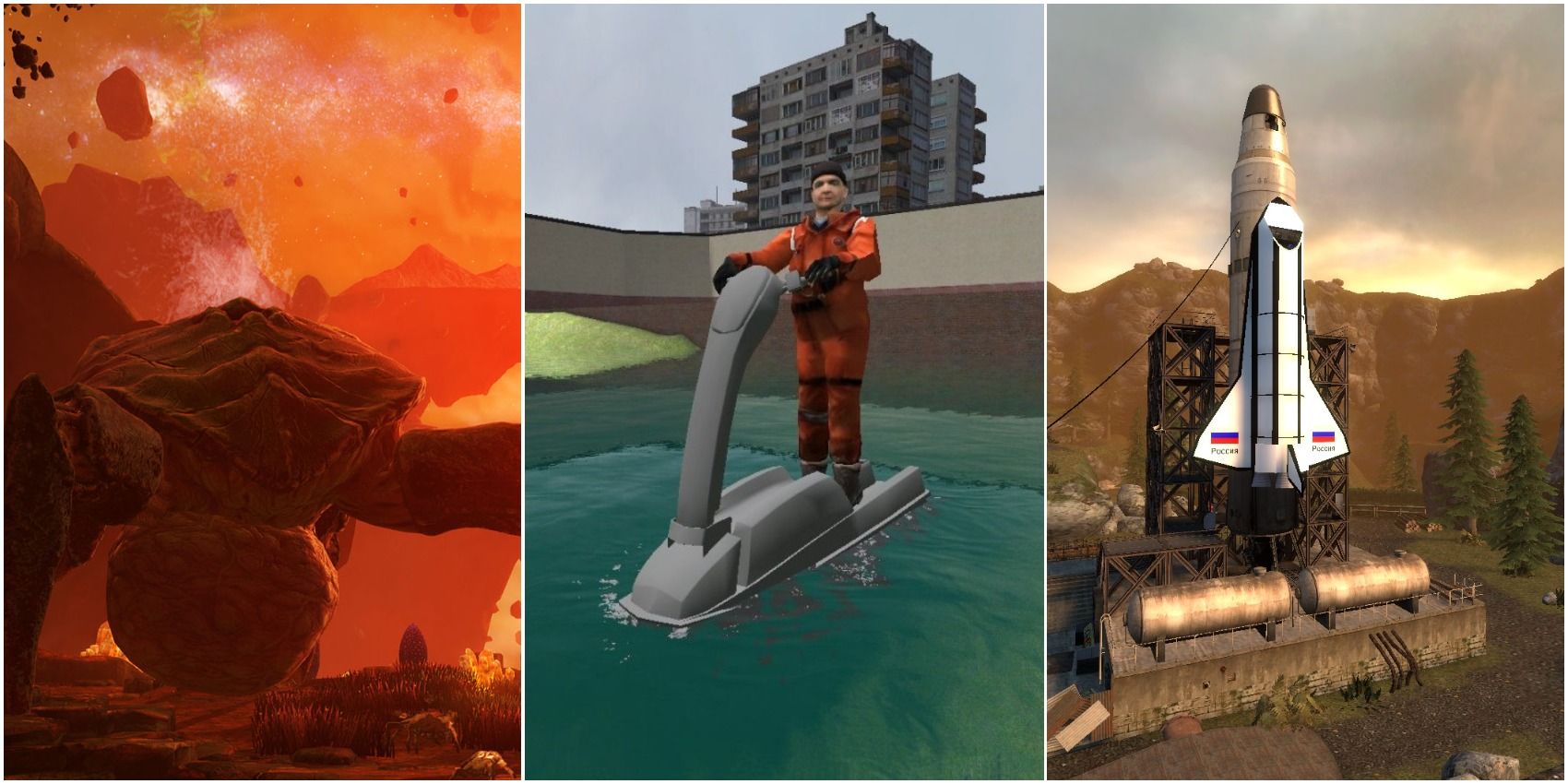 Mods in video games sometimes find a way to become as popular as the game itself. With Half-Life 2 and the release of Valve’s Source Engine, those who enjoy tinkering with games have been given a whole new platform to go crazy. The results led to some of the most popular mods of all time in all games.

Mods designed for Half-Life 2 ranged from improving the base game to creating whole new experiences for people. Some of the mods in the latter category even got so big that they were later developed into full game versions. If gamers want a solid modding experience, Half-Life 2 is a must try.

A mod specifically for Half-Life 2: Episode 2, Cosmonaut is an all-new adventure that spans the existing Half-Life universe. You play as a cosmonaut, otherwise known as the Russian astronaut, who returned to Earth after his mission to find that the Combine has taken over.

The mod features a new story and new settings with a lot of the same gameplay that makes the switch to Half-Life 2 a lot of fun. The mod was developed and released after it was simply an entry in the NostaliaVille challenge.

Those who used mods for the original Half-Life may have heard of The Gate. This movie-like mod received a sequel in the Half-Life sequel and it’s easily one of the best mods to experience in Half-Life 2.

The main plot of The Gate 2 takes place right after its predecessor’s plot and features the main protagonist going on an adventure across the galaxy, visiting different planets and battling unique enemies. The game has a full cast of vocal actors as well as a unique musical score.

When you think of the horror genre, one of the first franchises that comes to mind is Konami’s Silent Hill. Due to its importance, it was only a matter of time before modders decided to put ownership in different games.

Silent Hill: Alchemilla comes from a few creators who wanted to see Silent Hill in the source engine. It takes all of the concepts that made the original games a lot of fun and incorporated them into the new engine with an entirely new story built from the ground up.

So far, all of these mods have told a completely separate story from that of the base Half-Life 2 game. The Citizen, however, takes place concurrently with the events of the original adventure.

The premise is that an ordinary man who lost everything he held dear decided he had had enough, leaving his apartment behind and joining the resistance against the Combine. The story takes place across nine maps and there’s even a sequel that’s released.

6
Buy yourself a life

What does an 11 hour adventure campaign sound like for a mod? In Get A Life, players take on the role of a subway technician with leukemia. While he may appear to be an average character, the events that unfold throughout the story show that there is something unique and different about him.

The game takes place on 24 different maps and features a brand new HUD that allows for new gameplay. This includes a different type of healing system as well as drug and weapon upgrades.

While it’s nice to see all the adventures that could unfold with different characters, sometimes it’s nice to just play as Gordan Freeman himself in a new story arc. Released specifically as a mod for Half-Life 2: Episode 2, Mission Improbable puts Freeman on a mission to re-activate a listening post for the Resistance.

However, all hell starts to break loose and it’s up to Freeman again to try and calm things down. The mod uses a lot of original art, with over 300 new models and textures implemented.

Want to relive the crazy race that is Half-Life but do you feel like it was built in Half-Life 2? A mod that then morphed into a game released on Steam, Black Mesa takes everything from the original game and places it in the new Source Engine that made the sequel what it was.

While the textures were completely redone, everything else, from the soundtrack to the vocals, was as well. Although the game can be purchased on Steam, players can still download both parts of the original mod to this day.

Another mod that became a hit game on Steam, The Stanley Parable decided to take a much dumber approach to the Half-Life 2 modding scene. It’s the story of a man named Stanley who works in an office that suddenly has no one else in it.

The game revolves around a non-linear narrative that allows players to explore the desktop however they see fit. Players can make multiple choices that lead to different endings, some more serious than others. The game is probably the best version, but the mod isn’t far behind.

There is so much to love about every element that makes up the Half-Life universe. So, wouldn’t it be fun if you could play with all of this in a sandbox? Garry’s Mod, yet another experience that eventually became a very popular game, allows players to not only use Half-Life characters and items as they see fit.

It also takes inspiration from the Valve Counter-Strike and Day of Defeat franchises to allow players to do whatever they want with it. This is basically a mod that serves as a tool for regular players to modify the game themselves.

It’s not often that a game mod has its own Wikipedia page, but MINERVA really deserves it. Created by Adam Foster, who wanted to build each of his maps with an emphasis on the environment rather than gameplay, MINERVA takes place in the Half-Life universe where players take on the role of a renegade from Combine Overwatch. .

The story takes place where you will only encounter hostile enemies and the only other interaction you will have will be through the voice of Minerva, who is not physically present. Due to his job, Foster was eventually hired by Valve.

NEXT: What You Didn’t Know About The Half-Life Franchise

Next month hauntings forewarned of phasmophobia are prevented