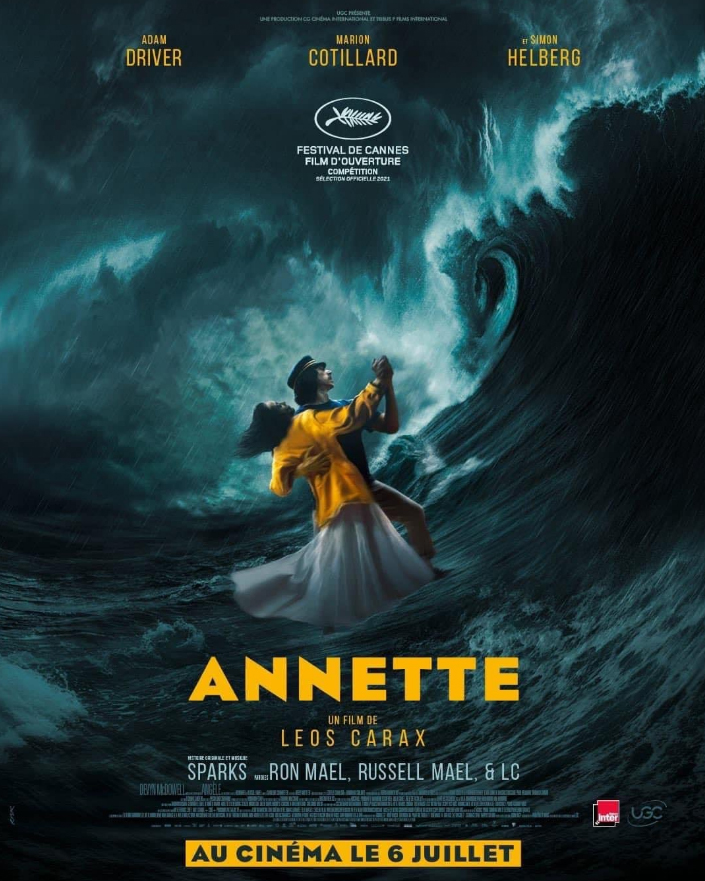 One of my favorite creative moments, regardless of medium, is the opening debut of “Sunday in the Park with George” by Stephen Sondheim and James Lapine. George, a contemporary artist and descendant of the famous pointillist Georges Seurat, talks to the ghost of Dot, a woman who could have been his great-grandmother and Georges’s lover. The two go through a grammar book with Dot’s notes, observing the historical Georges. Words Dot would hear George whisper to himself, a sort of mantra to the creative process.

As the music begins, Modern day George reads them. Order. Design. Voltage. Composition. Balance. Light. And then it wobbles. “I can’t read that word,” he complains. Dot intervenes with the response “harmony”. It sounds like the final defining word of an incantation. Tying the charm of the creative process together.

The moment is a perceptual recognition of creation as a process, of the things that come together. And it’s a sequence I kept thinking about after watching Leos Carax’s musical drama, “Annette”. Like “Sunday in the Park with George”, Carax’s musical is – in a way – devoted to the idea of ​​creation, legacy and reputation. “Annette” is not dedicated to the creative process, although neither is it the creative process. Significantly, however, it is work that is teeming with ambition, a sense of self, and is strange and empowering in a way that Seurat’s pointillism may have been to his peers in the 19th century, and that the Sondheim and Lapine’s creation would have been in 1984. Bold and ambitious, yes. But in search of harmony? I don’t know how much Carax is capable of accomplishing on this front. Although, who can say that it even matters to him?

“Annette” is, at various times, incredibly familiar and, at others, incredibly distant. It’s a love story and a show business story and a surveillance story. The most energetic moment is an opening sequence that is not part of its main plot. After a voiceover warning us to pay close attention to the following and to curb any compulsion to ‘sing, laugh, clap, cry, yawn, boo or fart’, we follow the cast of characters preparing for their roles, marching across a street as they ask for permission to start a catchy number, “So can we start?” As the lead duo, Adam Driver and Marion Cotillard, receive their costumes, they transform into our protagonists – Henry and Ann and they head to their respective creative pursuits.

Ann is a famous, classy opera singer. Henry is an ambivalent, rude comic. As she entertains audiences in moody operas, Henry struts moodily across the stage pushing the boundaries of what his adoring fans would consider humor. It’s an unlikely pair in one sense, but probable in others. They are two artists at the height of their glory, despite paradoxical dispositions. The media are mesmerized by their union, excited by the developing relationship and their impending transition to parenthood. But with parenthood comes responsibility and then jealousy. Ann’s star rises, Henry falls, and baby Annette finds herself trapped between fighting parents. A third act tragedy changes the momentum and “Annette” becomes a somber exploration of a man unraveling before our eyes – with the media there to capture every moment.

“Annette” has a complicated relationship with music. Most of it is sung with a score by Sparks (brothers Ron and Russell Mael). The band has been in the business for over 50 years, with idiosyncratic musical styles that oscillate between different types of experimental pop music. Here their score for the musical is restless and conscious, reliant on the constant repetition of lines and phrases, with varying effects. The way the song develops is a curiosity, in part.

But “Annette” feels far too ambivalent about her own musicality, reflecting how the film relegates Anne de Cotillard as a seemingly extra part. Even though the film advertises romance as central, Ann feels like an outsider to the dynamic. Even though we spend entire sequences with Henry during his comedy shows (which rarely seem funny), our glimpses of Ann at the opera seem more illusory than illustrative.

In the theme of love for “Annette”, sung and repeated throughout the film, the couple sings (and calls themselves) “We love each other so much”. There are obviously a lot of foreshadowing in this. No love for good needs to be declared so relentlessly. But also, why this turn of phrase? The syntax is confusing. Is it a statement, a declaration or a wish? It is as if they were singing to a spectator to convince. But, surely, for romance to work, we need them to show us and not tell us. Many have called the Sparks Brothers’ score a dialogue set to music, but that sounds like a fundamental misreading of what’s going on here. Declarative repeats don’t sound like spoken dialogue, but they don’t work the way traditional musical theater lyrics either. They rarely feel enlightened by music. Instead, they feel like they are working against the grain. There is tension and composition. But where is the balance?

Of course, part of “Annette” depends on the incongruous. The couple’s born child, the eponymous “Annette”, is not a human child but a CGI puppet doll – treated without a hint of irony. It’s disturbing – both for the fact but also for the blank stare he wears – and instinctively visceral. I find close-ups of the doll etched in my memory. But for what purpose?

It is instructive that the best moments of “Annette”, a musical in conceptualization, are punctuated by silence. Right before the romantic duo begins, there’s a menacing shot of Driver’s hands reaching Cotillard, a steering error but also a hint and foreshadowing – although not quite as we anticipated. Other evocative moments are punctuated with things seen and not heard – Cotillard’s face leaning out of a car window, a doll abandoned on the floor of a lonely room, hyper-neurotic preparation for a show and – the most striking sequence – a chaotic scene dancing in torrential rain. The last sequence is the only one dependent on the music of the film. The rest could be from any non-musical film. This dangerous dance, in the rain, is one of the peaks of “Annette”. It is a rare moment when Carax’s talents feel deployed in union with the musical form, rather than alongside or in opposition to it. Most of the time, however, when Carax has to shoot a sequence where the music is centered, the camera becomes strangely less confident.

“Annette” is not a song-and-dance musical, so there is no reliance on moving bodies, but by turning the song sequences so lukewarm Carax seems more guided by form. only by controlling it. There is an inherent non-realism in musical theater. Singing treated as realistic requires a suspension of disbelief – and not all musicals are built the same. It is not enough to inject music into a story that would exist without the music. For a musical to work, musicality must be part of its core. The surrealism injected into “Annette” raises the stakes, as does the puppet, but Driver is so stoic in his realism that he pierces vanity and “Annette” feels out of harmony – it doesn’t quite fit. When the actors sing, Carax’s camera follows them. For a director so prone to whimsical flights, these moments seem unusually calm. They feel impersonal in a way unusual for Carax, but also deadly for a film where personality and interiority seem essential.

Musicals, I maintain, are the closest things to the soliloquy to be found in early modern plays by Shakespeare and his contemporaries. The unreality of the musical form frees the characters, allowing them to sing their inner thoughts. But in “Annette”, the music never digs below the surface to find out what’s inside these characters. The characters sing what we see and what we already know, but they very rarely sing what they feel, or what they really want, or what they think. There’s a mismatch between us and them, and it seems too deliberate to be accidental, but it’s out of sync in a way that feels more exhausting than encouraging.

“Annette” feels like a great movie to prove that a movie is more than its subject, even its meaning. There are a multitude of ideas here, even in the familiar notes of its plot. It’s a movie about a bad man who does bad things. Carax is fascinated and repelled by Henry, and he’s especially fascinated by Adam Driver’s menacing body – and bare chest – whom the camera sees as an object of affection. But, “Annette” feels too depersonalized to really engage with much of the meaning behind the meaning until the very last issue, which feels focused and teeming with a clarity that has so far felt lacking. Or, I think, although I was wondering if I was just grateful for a musical number where the characters seemed to actually engage with each other – rather than with each other. But, this is only part of the whole.

Georges Seurat was one of the first neo-impressionist painters, and his pointillism technique revolutionized art. The word described a technique where small, distinct dots would be painted in isolation but combined to form an image, so that the dots would no longer be discernible and we would be faced with a singular whole. Isolated things brought together – in harmony. There are many discreet points that fascinate in “Annette”. But moving parts never really work together. Voltage? Yes. Design? Certainly. But with so much threatening poise, “Annette” lacks harmony. A strange thing for a musical.