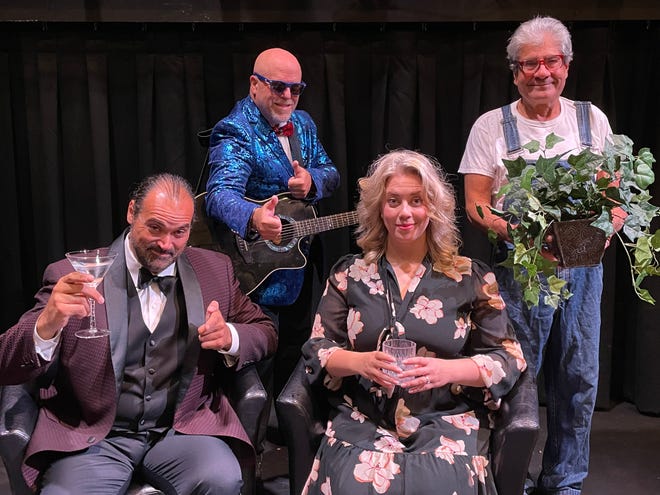 What song makes you moan whenever it unexpectedly pops up within listening range? Chances are he’s on the “Muskrat Love” set list.

The new production from the Cotuit Center for the Arts centers around these songs from the 1960s and 1970s to celebrate what the creators say “we all hate to love”. Yes, “Escape (The Pina Colada Song)” is there. And “Copacabana (At the Copa).” And “You light up my life”. And “Sugar, sugar.” And “MacArthur Park”.

And, of course, the title song that reached # 4 on the 1976 charts with Captain & Tennille. It’s a love song involving rodents – yeah, rodents – that director Jason Mellin says writer / music director Malcolm Granger chose for the show’s name because the song is “too catchy to say that it’s terrible, but too weird to say it’s great. Either way, it stays in people’s heads.

Mellin, the centre’s associate director of programming and production, acknowledges that revisiting horrible songs is an odd concept for a show, but says people have had a passionate response to the idea.

“When I show people the set list, every time they look at the list and say ‘Oh, I hate this song! It’s so terrible ‘but then’ Why is this song on the list? I love this song!”

Either way, he notes, “they want to hear it. This music is not interpreted in an ironic way or badly played on purpose. Everything is done seriously, the singers are amazing, and you can just come over and enjoy either rolling your eyes or enjoying a song that you secretly really love.

Granger was inspired to write and arrange the musical – originally planned before the pandemic – by the 1997 Dave Barry Book of Bad Songs, which was based on the most popular columns the Miami Herald comedian has ever seen. written.

In Granger’s show there are characters played by a dozen actors, but it’s an excuse to unearth these songs in one kitschy place. Over 40 of them, some in medleys.

“It’s built like a late night talk show, where the host, guests, and his band have no idea why they have to perform these terrible songs,” Mellin said. “So if you go to (‘Muskrat Love’) you will see ‘Barry Manilow’ singing ‘Copacabana.'”

5 shows on Cape Cod stages this week:Love, dreams, Ronstadt, Broadway and a ghost

One section is devoted to “desperately misogynistic songs”, says Mellin, “‘Vikki Carr’ comes out and says ‘I don’t think anyone wants to listen to my songs yet, they were so horrible.'”

The songs used date back to the baby boomer days, but Mellin, 31, says the younger generations are also familiar with their notoriety. Rupert Holmes’ “Pina Colada Song” was in the movie “Guardians of the Galaxy”, for example.

“Something about their earworm nature means everyone still knows them,” says Mellin, who laughs admits he knew every word in “Copacabana” by the time he was in seventh grade. “If it inspires so much passion, people will know. “

The cast were vocally trained by frontman Tedi Marsh, and much of the group is made up of musicians who performed at the centre’s sold-out tribute to Billy Joel and Elton John.

One section of “Muskrat Love” is actually called “Songs Wedding Bands Hate” based on responses Barry got in its original columns. But the nine musicians from Cape Town, Mellin says, were on board playing all those much-maligned songs.

“They were all absolutely thrilled to do it,” he says, “because, with the exception of those wedding orchestral songs, you won’t be asked to play a lot of these songs very often! And (the musicians) are just as passionate and emotional about these songs as the singers and actors.

If you are going to

What: “Muskrat Love: A Celebration of the Songs We Hate Loving”