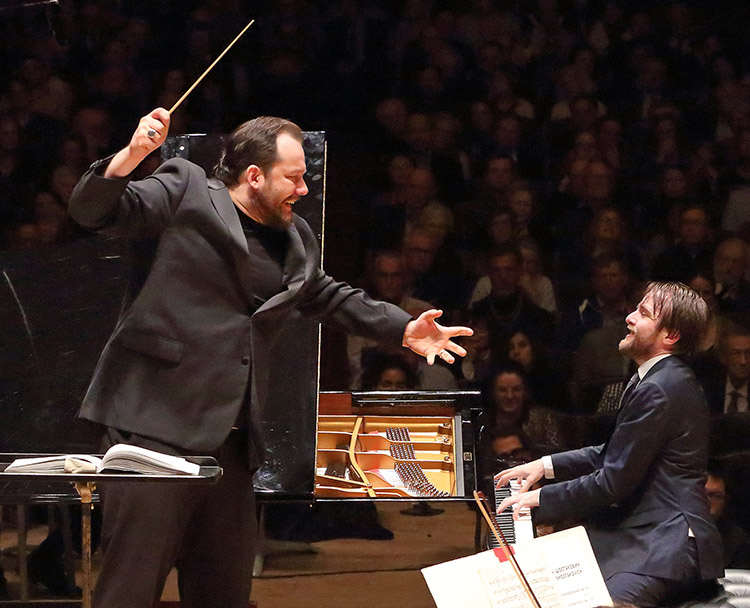 With the rise of Dadaism in New York and Zurich, a similar revolutionary avant-garde movement was developing in Russia when Prokofiev composed his Symphony No.1 in D major, Op. 25, and nicknamed it “Classic”. Although not himself a Dadaist, Prokofiev hinted at some influence, writing “When our classically inclined (in my opinion false-classical) musicians and teachers hear this symphony, they will be forced to shout for protest against this new example of Prokofiev’s insolence… when the audience will no doubt be content to hear joyful and simple music which they will of course applaud.

With BSOs in their summer white, Nelsons all in black – gave us a read you don’t hear often, taking the Prokofiev with dead seriousness rather than an entertaining plush toy. He infused the opening allegro with a subtle circus feel, taking it at a moderate pace, which worked well to bring out the interplay between the instrumental sections. The Larghetto, pulsing gently and with high, singing strings, evoked a slightly satirical love song, ending in sadness. Nelsons skillfully delivered the quintessentially Hydnesque moment, reminiscent of the “Clock” symphony, a tinge of grotesque, a slight feel of Egon Schiele. Under Nelson’s sharp wand, Prokofiev’s vanity “What would Haydn write if he composed in 1916?” – revealed an uncomfortable parallel between two unstable world orders on the verge of falling into chaos. The moderately paced Gavotte, on the other hand, appropriated Haydn’s appreciation of courtly rituals to ironicize their modern metamorphoses into equally joyful new rituals, such as audiences attending concerts with tickets in hand as laissez-faire. -pass magic, or mass shows for mass consumers. A dark, if not sinister midsection, briefly hinted at the foul smell of nationalism, followed by a distant repetition that inexorably receded with pomp and circumstance to culminate in thermal death. Nelsons transformed Molto vivace’s finale into a manifesto of modern aesthetics: speed, telegraph, mechanization, noise and bustle, almost manic in energy, creating a new modern classicism. Rocking and comedic, with a development of folk dance, it led with an increasing coda rush and star cadence. The modern world, with all its serious progress and confident march towards disaster.

In an attempt to go beyond Beethoven, Prokofiev chose to revive Haydn’s succinct and sober format. Brahms, whose First Piano Concerto honors and struggles with Beethoven’s Ninth Symphony at every turn, has taken the opposite route, plunging his concerto massively into subjectivity. Would Nelsons and Daniil Trifonov fight it, or give it “all the time in the world”?

The last. Keenly probing the ‘Maestoso’ mark and the key of D minor, Nelsons gave the orchestral introduction a fiercely sublime sense of ‘unchanging fate’. The exhibition emerges from the outset with a suffering lyricism, which Trifonov quickly transforms into a kind of Rachmaninoff martyrdom, more titanic in pain than Beethoven’s Prometheus, but infinitely more uncertain in his quest for divine fire. Trifonov is sometimes criticized for resorting to exaggeration for the special effect, but in this context it worked semantically: Absorbing the pain of Schumann’s tragedy, Trifonov’s piano tried unsuccessfully to assert itself against the domineering orchestra, then gathered the inner resources to erupt in violence, provocative crescendo octaves. The hero / songwriter has transformed before our eyes into a visionary – able to meet the challenge of Fate with his own creativity. And, yes, to help Clara – to hold her a mirror, so that she can see the outline and meaning of her own vast and possibly upset genius.

The Adagio, explicitly a portrait of Clara, began with an unusually beautiful expansion in the orchestra, spreading stillness like a vast cloak in the night. Against this swollen, melodic flesh, Trifonov entered with a distinctly lonely voice, made of soft phrasing, sweet and deliciously slow passages swollen with emotion, with a dramatic and emphatic trio, as if the young composer’s tribute to Clara was hollowing out a safe hollow. for its own rebirth. The return of Section A felt a little more grounded in the here and now, as well as more nostalgic, topped off with trills descending into a long sigh. The divine gift, at this point, stolen from a maternal and inaccessible figure, is quite simply love, timeless, fulfilling and dangerous.

Which brings us back to the quest for the composer and to the Promethean struggle. Trifonov opened the Rondo finale with a whirlwind of fierce determination – forget the “non troppo” – seizing on those deep subjective energies that make the composer a possessed and irresistible mage. We have now experienced the Paganini-style Trifonov, holding nothing back, harnessing primitive inner powers and rhythms the rest of us have long forgotten and suppressed. A shamanic, captivating, sacrificial priest but also a sacrificial victim of his own barbaric prowess, Trifonov has delighted and captivated, drawing gypsy frenzy from his own substance. Neither could the elegant horns of the orchestra prevent the piano from taking over irreversibly and dominating the score, more menacing in adulthood than triumphant; more volcanic than illuminating in its magnificent and terrible subjective glow.

The audience responded with all the primitive, irrational, and cathartic enthusiasm that Trifonov had mustered, and flashes without the shed reinforced the ovation. Tellingly, Trifonov played an exquisite, calm, and restrained encore: Bist du bei meir, of Anna Magdalena Bach notebook. “If you’re with me. “

We have come to expect the unexpected from Trifonov. He is an extremely gifted pianist and he can give us breathtaking and impressive performances. It can also render a work in the most confusing and even the weirdest way. Saturday night we shared a visceral excitement. Trifonov has proven to be a Paganini-style mage, captivating with his daring daring and captivating with his mind-boggling risk-taking. But he also hinted at his many other incarnations and perspectives.

Leon Golub is an astrophysicist at the Center for Astrophysics in Cambridge and has been a lover of classical music for over 50 years.