Jimmy Dennis DISCOVER THE ART OF PUBLISHING
Home Musical score Johnny Flynn on making the musical “The Score,” in which characters perform songs he wrote

Mercurial actor-musician Johnny Flynn – most recently seen on ‘The Outfit’ and currently appearing as Ian Fleming on Netflix’s ‘Operation Mincemeat’ – performed and composed the songs for the musical mystery novel ‘The Score’.

Flynn plays Mike, who, along with his best friend’s younger brother Troy (Will Poulter), hopes to make a score (find some hidden money) at a roadside diner where much of the film takes place. However, as contact is delayed, Troy finds himself drawn to Gloria (Naomi Ackie) – much to Mike’s chagrin. Flynn’s character is all smirk and cynical, and the actor makes his contempt for Troy, as well as everyone from the gas station attendant to Gloria and the few other restaurant patrons, palpable (and sometimes justified).

“The Score” features the lead actors singing moving Flynn tunes that express their emotions, and a duet, “Brown Trout Blues“Played by Troy and Gloria, is particularly charming. The romantic drama is quite slow as the film reaches its noir-tinged climax.

RELATED: “Emma.” is the candy-coated “Clueless” remake we deserve

Flynn spoke with Salon about his new film and what drives him to both music and acting.

How did you become involved in “The Score”? Were you cast and then accepted to do the music? Or did the music come before your casting?

It really is a strange series of coincidences. I knew [director] Malachi Smyth for a while. He had this idea that we should do a musical, and one day he asked to meet for coffee. I didn’t know anything about the script being written or anything, and he gave me the script. I started reading it and on the first page the characters are all singing “Barleycorn” by Johnny Flynn. I thought: what’s going on? I realized it was a fully formed script with my songs written. I was very intrigued. Privately, I had thought that one day I would like to write a musical using my music. Do you remember that movie, “Romance and Cigarettes?” I loved the way the music was used in this film. I wanted my songs to be portals to the souls of the characters. Here’s a script that basically did that, but someone else had written it.

I really liked Malachi’s script and how the songs worked in the script. I was intrigued to see if we could make it work. He was very generous and let me give grades; I needed to respond in the spirit of all true collaboration. I understand he wrote the script without the songs and he was happy with it, but he felt like something was missing and while he was writing the script he was listening to my music, and as a kind of midnight idea, he inserted some of my songs randomly but also intentionally: This song could bring something right now. It was an experience of automatic writing and seeing what comes out of it. When I read it, I never thought of this song in this energetic context or setting, but to see it portray this young couple at a time when they come together was really exciting.

Naomi Ackie and Will Poulter in “The Score” (Gravitas Ventures)

I love the scene where Troy and Gloria perform “Brown Trout Blues”, which means so much to them. Can you talk about how a song you wrote is used in a different context?

I loved seeing this gently choreographed dance routine fall into place. It’s so tender [scene] of two people discovering each other. My wife hates this song because we had been together for years, and it was after a fight. It’s a song about a long relationship, but where you both get to know each other, thwart each other and get over it. There’s a push and pull, but it’s basically someone saying, “I’m here for the long haul.” She thinks it’s our fight. It’s all about arguing, but it’s what makes us improve and grow, so let’s see [in “The Score”] a couple on the first day of their relationship and knowing that it is a long relationship is really beautiful. But I may be the only person to have this experience. I wrote this song when I was 18 and I’m 39 now.

A lot of those songs, I can’t remember what I thought they were about when I wrote them. My way of writing songs is quite abstract. The poetics of the words is the specific mixed with the abstract. There are a lot of conjuring images that are an emotional vortex to cross. Every moment you sing or listen to the song, you can project a bunch of different things. I don’t want to be too restrictive on what listeners should see, feel or think. I write songs with a big space for people to bring in their own experience and how they are emotionally that day.

Want a daily recap of all the news and commentary Salon has to offer? Subscribe to our morning newsletter, Crash Course.

What observations do you have about the music, songs and storytelling?

That’s why something like “Romance and Cigarettes” is interesting – that’s where the songs you know are used in interesting ways. My dad did a lot of musicals when I was a kid, and I love the form of the musical. I haven’t been a big fan of modern musicals; I like classic musicals. My heroes are Irving Berlin and Cole Porter – those economic lyricists who nailed a feeling into a scene through a song. These days I feel like it’s a reinterpretation or a revolution. I don’t think I can revolutionize the shape, but I’m really interested in playing with it. I wrote a musical for the radio which I am developing into a play.

Do you think you are chosen because you are an actor who sings or a singer who acts?

People maybe go actor/songwriter/musician and put them together, and I just say yes. It’s not that visionary. As I say yes, I think, “I could do something with that.” I want to do something interesting and feel fresh even if it’s on a small scale – put something new in the world. This project ticked all of those boxes. David Bowie’s film was an opportunity to play with this form. Sometimes these opportunities, I have to admit, I’m so lucky to be the only person they can think of who can play guitar and sing and can kind of do some acting. As an actor, you don’t have that much autonomy. Things come to you, and you say yes or no, and they only come to you if you’re lucky. The path you choose is to say yes or no. I just got into the position where I can imagine something for myself and know enough people to put it into place. My previous projects were something that lands on your lap, and it will be an adventure and I have to continue that journey.

What was cool about “The Score” is that they did that with my songs. I wanted to re-record the songs and have them completely reinterpreted. The way the songs sound in the movie is so different from the original tracks on the record. There’s a really different palette of instruments, and it was fun revisiting the songs with my band, who were there for the original sessions. We loved turning something into electronic sound.

Working with Will and Naomi as singers was interesting because neither of them has a career in that field. They have fantastic voices, but it was the first time they were in a music studio with a producer recording a track, so it was coaching. We had to do it before filming because we didn’t have enough money for a “The Miz” approach. We had to have the leads before the movie. The producers and Malachi hadn’t talked about the additional music, “the score of ‘The Score'”, so I said I could do it, because I love making music, but it became a whole other chapter, mark the scenes. I was writing the songs, recording the songs, re-recording the songs, shooting the movie. I’m inside now and I know how this thing unfolds. For a small film, this was a very big undertaking for me. 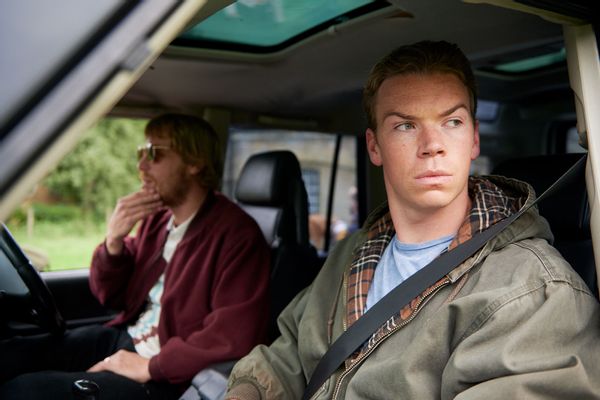 Johnny Flynn and Will Poulter in “The Score” (Gravitas Ventures)

How did you come up with Mike’s backstory and what explains his character’s disdain for everyone? Is he a victim?

I really enjoyed playing someone with such a chip on their shoulder. The only way to make him work is for him to be so cynical and so jaded. Through his own failures, of which he is only too aware, he has been turned upside down. There’s a deep, implicit resentment brewing because of the way he was treated in his relationship with Troy’s brother – that character is the ghost in the room. You must have a tangible feeling that he has a point to prove, and that he is beside himself. You want to sympathize with him a bit and not see him as a victim of circumstance for the story to work. I don’t condone Mike’s behavior, but you have to have a little compassion for every character you play even if you rationalize how they make the decisions in your life even if they lead to terrible things.

“The Score” has elements of a crime movie, especially in the last act, where Mike fights and gets a little roughed up. Are you a badass?

[Laugh] It’s fun as an actor to do things that you don’t do in normal life, and I love practicing. Choreographing a fight sequence and working with rubberized gag props is fun. It’s still storytelling in the end. You try to be a magician and show a trick and not show what’s behind the curtains. I also like to drive in movies, and if someone tells me I have to pull over in a skid, I think I’m Steve McQueen. If I do a fight scene, I think I’m Jackie Chan.