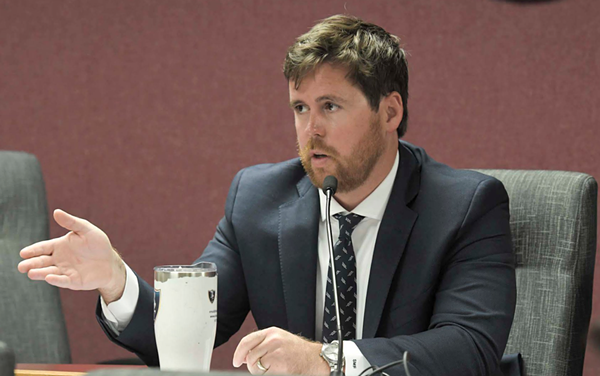 This story was originally published in the Missouri Independent.

When he announced he was running for the post of auditor on Thursday, Missouri Treasurer Scott Fitzpatrick vowed to fight liberal politicians who “used the pandemic as a cover to justify spending trillions dollars of money borrowed to finance their socialist program. ”

What he didn’t note is that the company he founded received more than $ 1.3 million in that federal pandemic relief funding.

MariCorp US, a boat dock repair company on Table Rock Lake in Shell Knob that Fitzpatrick founded as a teenager, has received two loans under the federal government’s Paycheck Protection (P3) program designed to help small businesses cope with payrolls during the COVID-19 pandemic.

The status of the second loan, in the amount of $ 646,071 and received just three months ago, has not been made public.

According to the PPP loan database maintained by ProPublica, the first loan aimed to maintain 54 jobs. The second was to maintain 60 jobs. Loans can be canceled if companies meet criteria that include not laying off employees for a set period.

Fitzpatrick’s campaign defended federal funding, saying the loans were necessary because “the government broke the economy and MariCorp US, like millions of other companies, had to lay off employees with families.”

“There is a distinct difference between the socialist proposals coming from liberal politicians and the Trump administration’s paycheck protection program, which has received almost unanimous support in Congress to keep people working,” said Steele Shippy, Fitzpatrick campaign advisor.

PPP was created in April 2020 under the CARES Act. The aim was to provide help to businesses to avoid massive layoffs as the economy faltered under the pressure of the pandemic.

A year later, and a month before Fitzpatrick’s company got its second loan, Biden signed the US bailout, which extended the PPP program.

While some economists have questioned its success, arguing that it primarily helps companies that weren’t at risk of going bankrupt, the program is credited with averting millions of job losses and deeper economic catastrophe.

Since almost the start of the program, politicians – especially members of Congress – have come under scrutiny for receiving P3 loans.

Fitzpatrick, 33, was appointed state treasurer and was sworn in in January 2019. The office was released by Eric Schmitt, whom Parson appointed attorney general after Josh Hawley resigned to serve in the US Senate.

He announced Thursday that he was running for the post of auditor, a day after donating $ 250,000 to his own campaign committee.

Shippy said MariCorp US supports nearly 70 families and generates “millions of dollars in wages and tax revenues every year.”

The company qualified for a P3 loan, Shippy said, and accepted the money to “protect families who depend on it for a paycheck.”

“The company used every dollar of funding received under the program to pay employees,” he said, “and luckily did not lay off any employees during the pandemic, despite soaring costs of the labor and materials. ”